A prayer from Lyn Ungar:

the most sacred of times?  Cease from your travel.

Cease from buying and selling.  Give up, just for now,

on trying to make the world different than it is.

Sing.  Pray.  Touch only those to whom you commit your life.

And when your body has become still, reach out with your heart.

Know that we are connected in ways that are terrifying and beautiful.

(You could hardly deny that now.)

Know that our lives are in one another’s hands.

Do not reach out your hands.

Reach out your heart.

Reach out your words.

(Surely that has become clear.)

Reach out all the tendrils of compassion that move, invisibly,

Promise this world your love – for better or for worse,

in sickness and in health, so long as we all shall live.

The poem / prayer above was given me by a dear friend in the Canberra Region Presbytery.  Lyn Ungar ran their Retreat last year.  Worth consideration for the future methinks. 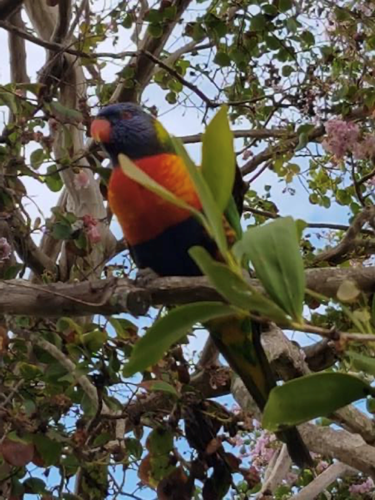 Last week I gave you a waterfall and my nature feature for today is one of our local Lorikeets.  Veronica established ‘Café Seed’ in one of our larger backyard trees when we first arrived in the area and the local birds very much appreciate her tender care.

When you have all this extra time it is good to appreciate just how beautiful nature is. I even made a discovery about birds this week.

Did you know that Magpies have absolutely no sense of smell?  It must be so, as my dirty work boots with rather odorous old work socks shoved into them have been sitting on our deck after John’s recent digging escapades.  Veronica and I had great entertainment this week as Mr Magpie decided it would be good to explore the inner workings of both socks and boots.  Braver than I am!

What’s going on?  We have continued as a presbytery to stay in touch as best we can.  The first couple of weeks were fairly hectic and of course with Easter Week just about upon us, ministers in placement and lay leaders still have a busy few days ahead.

It has been gratifying to hear from a number of people across the presbytery and hear a little about how they are handling these new times.  Considering none of us have travelled this way before, we can have a go at what seems a good idea and if it doesn’t work, well. No harm done. 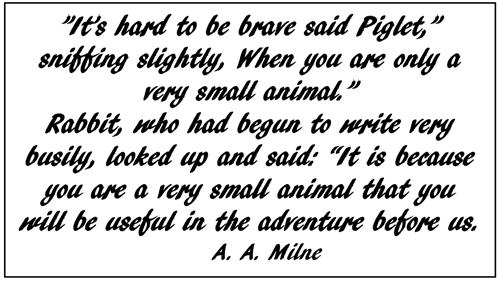 Some of us are getting familiar with something called ‘Online Church’.  If you have access to a computer and have a Facebook account, we seem to have any number of options of this new phenomenon.  Rev Cherie introduced a MNC Online Church last week and I hear that some 50 people were involved in last week’s service.

A number of churches in our Synod have had, or are planning Facebook services, which appear to have some traction.

A few of us are offering – for the none computer people – a weekly written devotional. It has been pleasing to see a good take up of this offering and I expect this option will likely grow as we go forward.

Pastoral Care?  Again I am thrilled with the focus on pastoral care among our people. People are getting on the phone and checking on congregation members.  Particularly with the new rules on isolation, this is highly valued.

In encouraging this contact one minister has called upon their people to be ‘Channels of Grace’ as they keep in touch with people perhaps not internet savvy, or just needing a caring contact, or dropping off a news sheet or devotional.

You don’t have to give up pastoral visiting as long as you are not constrained by age limitations.  One of our ministers will still physically call upon members and have a yarn on the phone with the person while sitting on the front verandah, and pastor and congregant able to see each other through a window or doorway.

Bible Studies?  Some of us have used this media before for teleconferences, but the buzzword at present is ZOOM!  No we are not speeding, simply a piece of computer technology helping to keep us connected.  For 40 minutes you can have a free Zoom Bible Study.  Longer than that is still a very cheap option of keeping in touch. 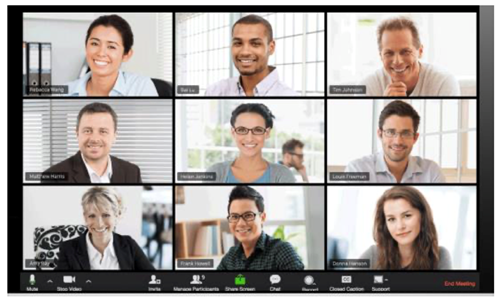 I have colleagues now offering me a cup of tea – get it yourself of course – and chat via Zoom.  I am hearing rumours of people setting up a Virtual Office where you can drop in on the minister at certain times of the day via electronic media.

For others it is someone offering a weekly Bible verse to reflect upon.

A brave new world is being discovered it seems.

William Willimon influenced my early journey toward ordination.  I share some of his thoughts as we approach Easter Week:

‘Humour is thus a part of Easter because, as in so many good jokes, humour gives us a temporary escape from the bounds of history.  In a joke, things don’t end as they usually do in life.  We are surprised.  We smile.  There is room, God-granted space between the determinations of history and time as God is making time God’s.  We are not to take the present too seriously, as if now is all there is that is going on in the world.  Thus the saints once spoke of Easter as the great joke God played on the devil.

We are ultimately hopeful and humorous about the future because we have seen the future.  The One who is, and is yet to come, is also the one who has come.  This new is not merely some future hope but is already present as event, as newly enacted here and now.  That’s what ‘kingdom of God is at hand’ meant in the preaching of Jesus.  In preaching, Jesus took time for us.  In Easter, that which was concealed in the earthly life of Jesus was revealed, became present to us, now.  That which was from before the foundation of the world (John 1) became real, now, whenever the Risen Christ slipped through locked doors and was present (John 20).  We who were ‘once … far off’ have ‘now … been brought near’ (Eph 2:13).  Whenever this story is preached, it is effected.  Whenever anybody hears anything in a sermon, the kingdom of God has come near, now, death’s grip on the world is broken – it’s Easter all over again.’  From ‘Undone by Easter’ – Abingdon Press

One of the things asked of me in feedback was to get a newsletter out before Friday to allow it be distributed for the weekend.  Sorry friends – I have failed!  But I will keep trying.  If I was to have a tombstone, part of it might read ‘HE HAD A GO!’

Do keep sharing any stories and we can pass it along to as many as possible. 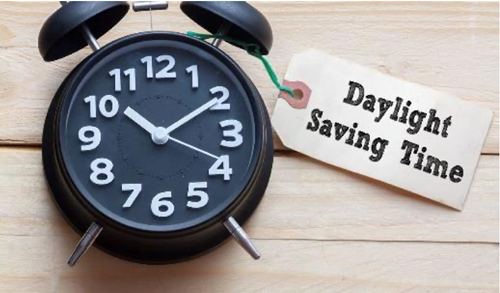 This is a good thing.  An extra hour of sleep.